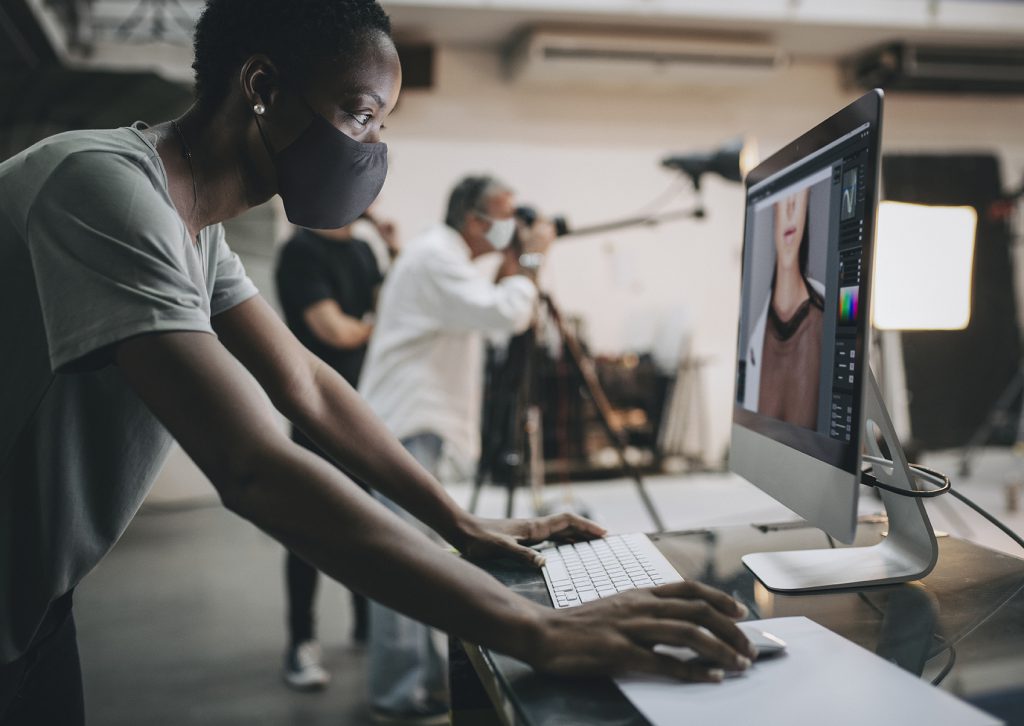 The extended studio shutdowns and soaring online sales brought on during the pandemic have piled immense pressure on e-commerce photo studio workflows. But what are the long-term ramifications of having to adapt to a new way of working?

“We were all under the impression that we were closing for two weeks and then we’d be back in the studios. How little did we know, right?” Like most of us at the start of the pandemic in 2020, Ali McLeod, AVP, Photo Studios at Saks Fifth Avenue, did not anticipate the seismic impact of Covid-19.

But as the global lockdown began to bite, Ali and her team realised that they needed to come up with a solution for continuing to fulfil the photography requirements of the Saks retail teams. “With our bricks and mortar stores closed, everybody was looking to dot com to keep things going. But with our studios also shut down, it really was crunch time.

“What we ended up doing was setting up home studios – but on a really large scale. We had over 20 people shooting at home, and we’d helped set them up with the equipment that they needed in their basements and living rooms.

“We worked really closely with our direct partners in sample management and asset protection to create a kind of end-to-end flow of merchandise from the distribution centres of the vendors to my photographers’ and stylists’ homes. Obviously it wasn’t as productive as a full capacity in-house studio, but we got through a decent chunk every day. And we’d pulled it together in less than three weeks. So we were really agile and I was really proud of the team for getting comfortable with not knowing and just trying stuff.” 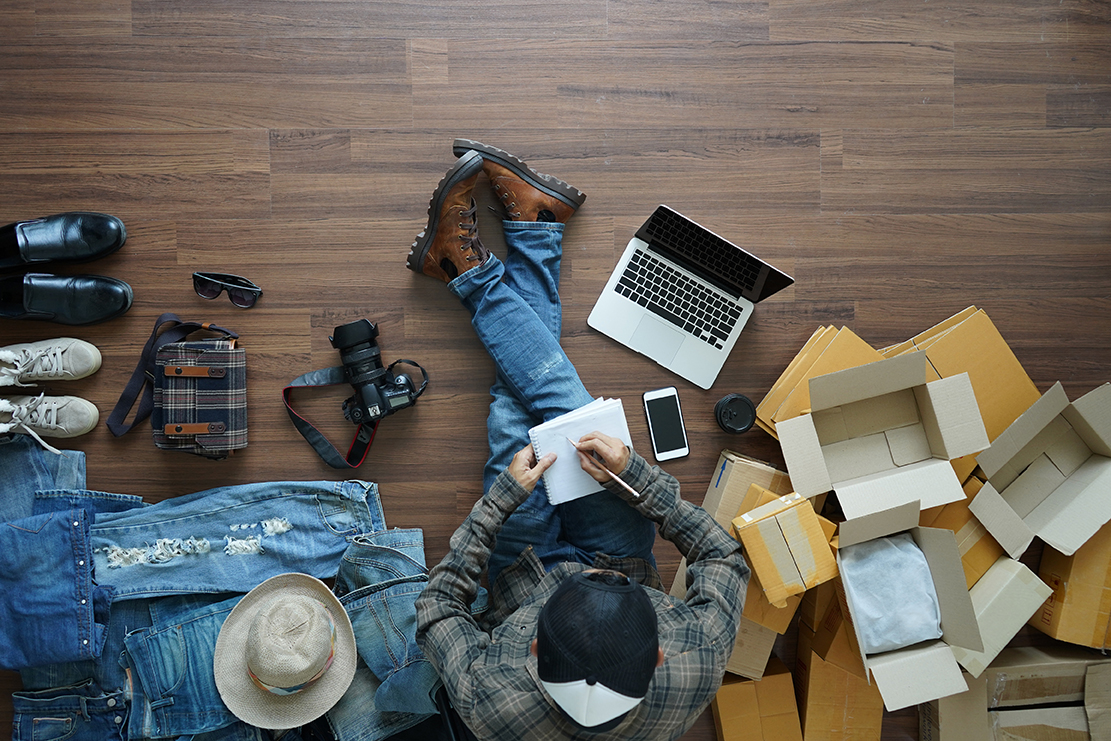 With the repeating cycles of lockdown and limitations imposed by social distancing, photo studios have faced many challenges as a result of Covid-19. It has forced change, adaptation and the adoption of new working practices. But which of their short-term solutions will have a long-term impact?

For Ali, the flexible approach shown by her team has led to permanent changes.“I think that one of the things that we’ve been really successful with is being more open to making changes on the fly,” she says. “Previously, we would probably all have raised an eyebrow and said, ‘well, let’s have a meeting about that’. But now, I think we’re more content with less of that and trying not to restrict ourselves too much.

“We’re being more agile with our scheduling too. We have item count minimums and maximums, but we’ve really started to flex on those. Maximising our resources is something that we really learned through Covid, and thinking outside of the box too – not just saying this is how we’ve always done it, so it has to be done this way. In this scenario it can’t be done this way, so what can we do, rather than thinking about what we can’t do. So I think it’s changed the mindset a little bit, made us a little bit more agile, and made us more open to thinking differently.”

The content teams led by Jennifer Bakija, Senior Manager, Visual Rich Content at US industrial supplies and equipment giant, Grainger have also shown flexibility during the pandemic. Although a shift to shooting products at home is one aspect that is definitely not set to be a permanent change.

“We had one photographer who was shooting at home for two months, but he missed the efficiencies of our photo studio,” says Jennifer. “While he was excited to still be actively working, he was happy to move back into the studio because that’s where you have the space, you have the right equipment, and you don’t have any trip hazards.”

With the easing of restrictions seeing workplaces gradually opening up again, the photography department at Grainger has adopted a hybrid approach. “With the studio, I would say that for people who have to deal directly with the products – so the photographers and co-ordinators – their roles will not be remote. They can’t take a robot arm home, and they really can’t accommodate that huge volume of products that we need to get through. So for those people, I don’t see it changing,

“But I do see it changing for those roles that have more flexibility. The retouchers are in two days a week, for example, and then working from home for the rest of the time.”

Communication is obviously key when you’re having to co-ordinate production across a fragmented workforce. This is where Microsoft Teams is likely to continue to be an asset, says Jennifer. ”When the photographers have a question for the retoucher or the supervisor, Teams is more automatic. It can often get a response quicker than when you’re in the studio, 20 feet from someone, and you’re wearing a mask that you can’t be heard through.” 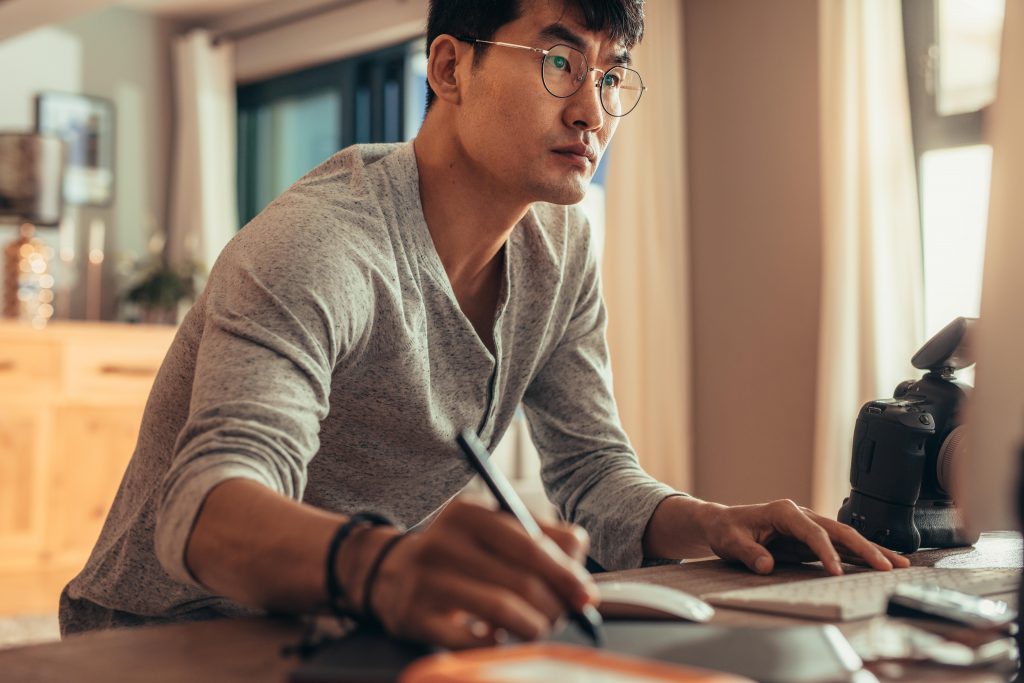 Pierre-Albert Didier, the former Media Group Head of Projects at French fashion retailer VeePee who’s currently photographing the vintage YSL collection at Saint Laurent, has first-hand experience of the effects that Covid-19 can have on photo studio work practices.

“When I caught Covid we had to stop production for ten days because all of the team needed to be tested.”

Like Jennifer, Pierre-Albert says that the loss of face-to-face contact during the pandemic and the shift to alternative ways to exchange information continues to have an impact. “We actually share a lot of information through SpinMe Studio,” he reveals. “So while we are shooting with SpinMe Studio, the owner of the project that we’re currently working on is also carrying out all the quality control remotely on her computer during the photoshoots.

“She doesn’t have access to the capture module and things like that, but she’s able to simply add a comment to images, such as asking us to check the colours or adjust a button, for example. And then the next day, I can read all of those comments, and see which images need to be reshot and which ones are okay and can be exported.

“It’s nice to work this way, through SpinMe Studio, because you can also have instant feedback without needing to be in the same location. I can take a shot and 30 seconds later, I can see whether it’s perfect or not.”

Using a streamlined set-up in this way brings efficiency savings. But does Pierre-Albert see this as being a new way of working in the long term?

“I’m not sure if it will be a permanent change,” he says. “Obviously it depends on what’s going to happen next with this pandemic. Once everybody is vaccinated, the different departments will probably go back to working together again in the studio. But I can see the remote quality control becoming part of the routine. It just allows people to focus on other things.

“Often, the people that at controlling the quality of the images are not 100 percent assigned to a particular project, and they have other jobs that they need to sign off. If they have to come to the photo studio to be with us and check everything we do every day, it’s a loss of time for them. So I’m sure that working remotely at least some of the time is going to be increasingly adopted by the industry.”